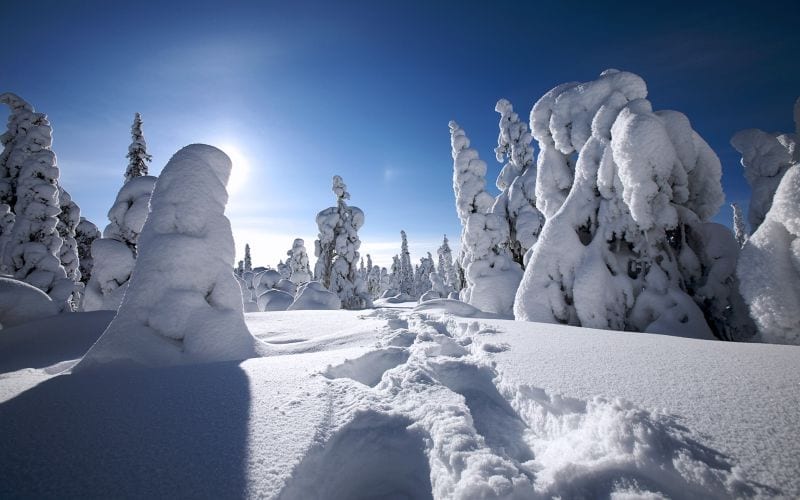 Many customers are surprised to learn that cold temperatures can cause some common ice maker problems. Although an ice machine chill water to form ice, if the air or incoming water falls below 45 degrees Fahrenheit, it can cause several problems like extended harvest times, freeze-ups, and cracked water lines.

Problems stemming from cold weather can result in a paid service call. To avoid an ice maker freeze up, you can follow a few best practices during the cold winter months.

Hoshizaki KM series ice machines use a combination of around 10% hot gas and 90% water to release ice cubes from the evaporator plate so they can drop into the ice bin. Part of this process involves a thermistor, located on the suction line, which measures the output temperature of the evaporator plate. When the temperature reaches 48 degrees, the machine begins a defrost timer set for factory settings.

When the ambient air temperature, incoming water temperature, or a combination of both is below 45 degrees, it takes longer for the output temperature to reach 48 degrees and signal the defrost timer. As a result, longer harvest cycles are a common ice maker problem you’ll encounter in Hoshizaki KM models during the winter. If conditions don’t change, the ice machine will eventually shut down into a safe mode, which means it will stop producing ice altogether.

Installing the commercial ice machine in a temperature-controlled room set around 70-75 degrees is the best way to combat cold ambient air. As for water, insulating your water pipes is the best method to make sure water doesn’t drop below 45 degrees. If you have a lot of incoming cold water coming to your location, a plumber can help you find the best solution.

An ice machine consists of a lot of vital components that make contact with water. These include but not limited to:

Just to name a few.

Again, installing the commercial ice machine is in a temperature-controlled room is the best way to guarantee components don’t freeze over. By keeping the temperature between 70-75 degrees, you can ensure that components stay at their spec temperature.

Your ice machine isn’t the only thing that is susceptible to freezing. Water lines can also freeze if they are not properly insulated.

Have you ever filled a water bottle to the brim and placed it in your freezer? If you have, you know that water expands when it freezes, causing the bottle to balloon out or break open. Well, the same thing can happen to your water lines if water freezes.

Pipes can also expand to the point where they crack open, resulting in leaks and a lack of ice. Worst of all, you’ll need to pay a plumber to come out and install new pipes if they end up cracking.

Since frozen water pipes often occur outside your establishment, you’ll need to insulate your pipes from the cold weather outdoors. Again, make sure to contact a plumber familiar with your area who will know the best way to prevent pipes from freezing over.

When the ambient air temperature gets too low, it can cause thermostatic bin controls (the device that shut your ice machine off when the ice bin is full) to fail.

Thermostatic bin controls are common in larger machines. They consist of a small bulb with a refrigerant charge that extends into the ice bin and sends a signal to the ice machine to shut down when it reaches a low enough temperature. As ice rises in the bin and touches the bulb, the temperature lowers, and the unit shuts down.

When the ambient air temperature is below 50 degrees, the thermostatic bulb won’t register the temperature accurately, assuming due to the low temperature reading that the bin is full. In this event, the machine will never turn on and not produce ice in the process.

Ice machines are temperamental pieces of machinery, that are designed to operate indoors under steady temperatures. If you suspect there will be an extreme temperature change on the horizon; it’s best to prepare your unit to maintain a steady ice production rate and avoid any possible damages. It only takes a few, simple preparations to be ready for the cold weather. If you live in a particularly cold region, make sure to you’re prepared for the cold season.

Worry-Free Ice Machines in Every Season

Easy Ice customers get two preventive maintenance events a year. If they’re worried about lower temperatures, our experienced technicians perform an ambient air and water tests during every preventive maintenance visit. We help our customers understand what to expect during the cold season. When you have an Easy Ice subscription, we supply you with a top quality ice maker, and then we take responsibility for ensuring the ice maker operates at peak performance year-round — no matter what.

Sing up for an Easy Ice subscriptions, and take the hassle out of supplying your business with ice.