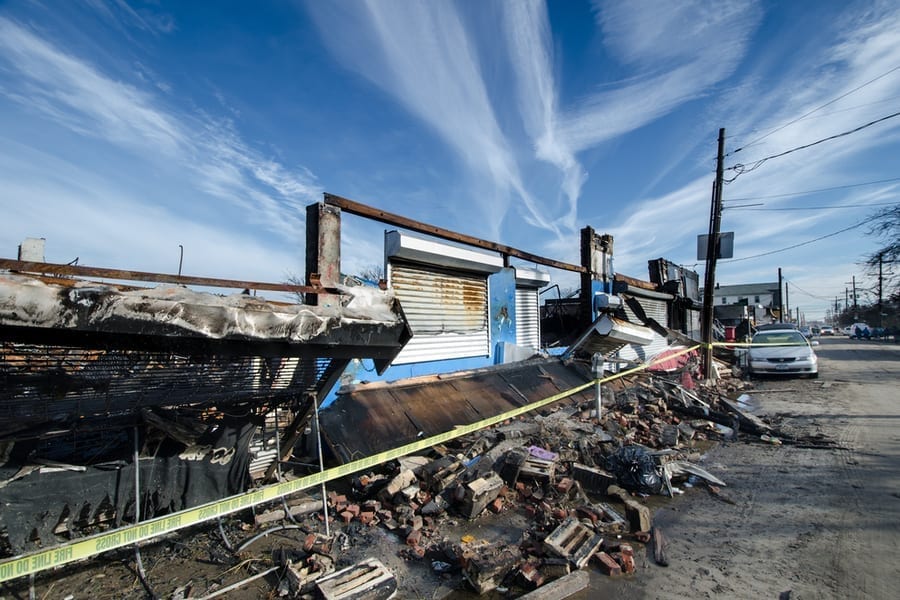 Long Beach Island was one of the hardest hit areas of Hurricane Sandy’s devastation and Ship Bottom saw 46% of the city’s structures damaged, including the firehouse.  It’s been a year since the storm ravaged the New Jersey coastline and cleanup is ongoing.  Recently, Chef Robert Irvine engaged in a remodel of the volunteer firehouse in Ship Bottom.

Irvine is known for saving failing restaurants as well as his philanthropic work with US military personnel, the Gary Sinese Foundation, and numerous children’s causes.  Late in the afternoon prior to revealing the remodel to the volunteer firefighters, Irvine realized the ice machine in their kitchen had been irreparably damaged.  On a tight schedule, Chef Irvine reached out to Easy Ice for a solution.

“This was a problem.  We couldn’t do the unveil without a working ice machine.  It was 6:00 pm and I needed a new ice maker delivered and installed by 7:30 am the next morning.  I called Easy Ice because in my experience they are the only ice machine service company that could do this” said Irvine.

Easy Ice is the sole ice machine subscription company with distribution nationwide.  “Our business focuses on making sure our customers’ machines are working 24 x 7, so we’re used to late night calls,” said John Mahlmeister, CMO of Easy Ice “but this one was a significant challenge.  Ship Bottom’s not exactly near a major metro area, but we were determined to make it happen.”

“The guys at Easy Ice not only got me the ice machine in a tight timeframe, they also donated it to the firehouse.  These firefighters are volunteers who put their lives at risk during Hurricane Sandy.  I respect them.  I was relieved we could finish the remodel project with Easy Ice’s help” said Irvine.

“We have a unique ability to deliver this type of service to our ice machine customers.  We were delighted to leverage it to support Robert’s charitable work,” added Mahlmeister.  “Most importantly, we’re thankful the volunteers at the Ship Bottom Fire Department are back to doing what they do best.”

Easy Ice is the only national provider of ice machine subscriptions.  Partnerships with Ecolab, Hoshizaki and Reddy Ice uniquely positions Easy Ice to deliver their innovative solution at the local and national level.

With more than 25 years in the culinary profession, there aren’t many places Chef Robert Irvine hasn’t cooked or challenges he hasn’t had to cook his way out of.  During his time in the British Royal Navy and in the years that followed, Robert has cooked his way through Europe, the Far East, the Caribbean and the Americas, in hotels, on the high seas and even for the Academy Awards; and that was before his career in TV.

As the host of one of the Food Network’s highest rated shows, Restaurant: Impossible, Robert is best known for saving struggling restaurants across America by assessing and overhauling the restaurant’s weakest spots. Starting in the Fall 2013, Chef Irvine added a new challenge to his resume as he mentors and challenges aspiring chefs as the host of Restaurant Express, a new show airing on Food Network.

Going on its third year, Robert continues to tour his live show, Robert Irvine LIVE, across the US.  Robert also operates two restaurants in South Carolina, Robert Irvine’s Eat and Robert Irvine’s Nosh and is the author of two cookbooks, Mission: Cook! and Impossible to Easy.  Robert was previously the host of Food Network’s Dinner: Impossible and Worst Cooks in America.  Visit www.ChefIrvine.com to learn more about Robert Irvine, his TV shows, live shows and restaurants.