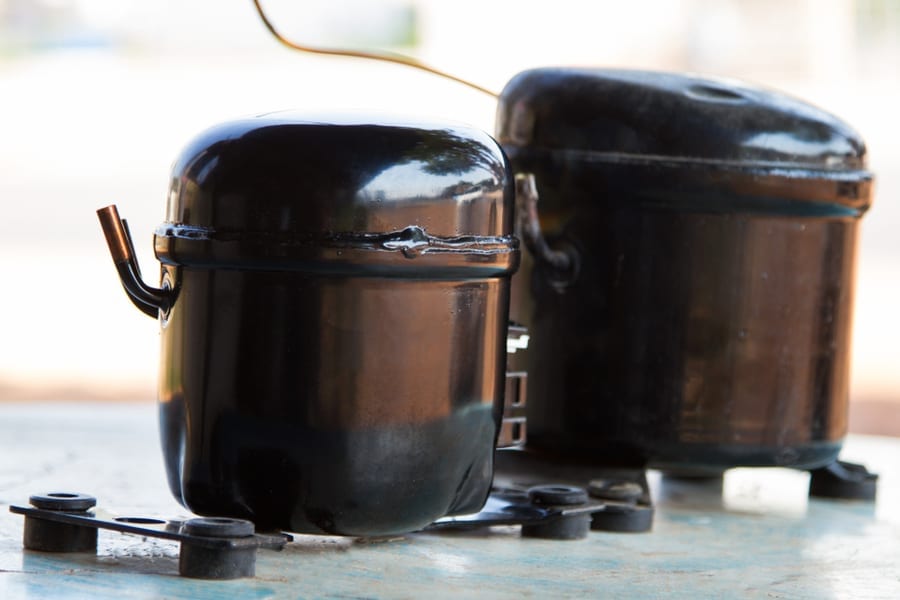 Preventive maintenance is one of the most important ways to care for your ice machine – and your bottom line! Preventive maintenance allows an ice machine technician to identify potential problems before they lead to major, expensive repairs. Even something as simple as a bad wire can lead to a bigger issue if left unaddressed. A simple $35 repair can prevent larger repairs that cost thousands of dollars. While all ice maker components are important, some are more costly to repair than others.

Many of the core refrigeration components in an automatic ice machine are pivotal if you want your unit to produce ice. If these parts are damaged, they may require a complete replacement. Sometimes the cost of the repair rivals the cost of a new or used ice machine.

Let’s discuss some of the most important ice maker parts you should care for – and how much it can cost to repair them.

Your ice machine evaporator is one of the most important ice maker components as far as producing ice is concerned. The evaporator is responsible for freezing, forming, and releasing ice cubes.

From a refrigeration standpoint, the evaporator plate is where ice-cold refrigerant freezes water into ice. This ice machine component helps to freeze ice into its designated ice shape, whether it’s crescent ice, square ice, or other shapes.

Manitowoc ice makers use hot gas created during the ice-making process. A hot gas valve (another expensive ice machine component to repair) redirects this gas to the evaporator, where it’s used to heat the plate until the ice falls off.

There are a number of issues that can lead to big repair costs. They include:

Evaporator repairs can cost as 1000s of dollars to fix. Large ice maker evaporator repairs might be so expensive the price of a new ice machine might be cheaper than the repair itself. Routine maintenance is the best way to prevent most of these issues from occurring.

When it comes to nickel-plated evaporators (common on Manitowoc ice machines), using harsh acids can lead to severe damage. If you plan on cleaning your evaporator plate, make sure to use a nickel-safe cleaner and follow the instructions on the label.

Compressors are ice maker components that pressurize refrigerant as it moves through the refrigeration system. In its pressurized form, refrigerant is a hot vapor that makes its way through the condenser to cool, where it helps to freeze water in the evaporator.

Overall, the longer a compressor activates, the faster it will begin to wear down. There are a few symptoms that signify a bad compressor. They include:

If the air has a lot of dust or other particulates in it, those particles can cling to the condenser, eventually forming a thick covering over the coils. This covering will insulate the heat within the refrigerant, forcing the machine to work harder to cool it down.

Water cooled ice machine condensers use water, instead of air, to absorb the heat within a condenser. In these systems, scale produced from mineral-laden water can cling to the condenser creating an insulating cover as well.

Fin degradation is another issue. This happens when the fins surrounding the condenser warp, bend, or rust. If the fins cannot return to their original shape, it will hinder the ability to emit hot air out of the unit. This is a big issue in coastal cities, where the humidity can damage these fins.

When ice machine condenser issues begin, they will often force an ice machine compressor to work longer and harder to produce a batch of ice. This leads to many of the issues seen in the section above.

As water fills the evaporator chamber, the walls of the chamber become ice cold. As ice begins to form on the chamber walls, the auger scrapes the ice off the walls and up into a storage container.

If the upper or lower bearings in the auger system come out of place, it will misalign the auger, causing it to strip the metal surface of the evaporator chamber. When this happens, you will hear a loud, screeching metal sound, as the auger begins to scrape along the chamber walls.

Bearing replacements are not cheap. The average bearing repair costs can cost thousands and could justify the purchase of a new ice machine.

A good technician always considers the end user’s needs in mind. The best ice machine technicians make it their job to save the business owner money wherever they can. If an ice maker component’s repairs are covered by warranty, a good technician will work to get those repairs covered.

Skill is also a money-saving factor when choosing a technician. Much of the cost that goes into ice maker component repairs is attributed to the amount of time it takes to service the machine. A skilled technician that specializes in industrial ice makers will take less time to repair a unit than one who is new to commercial ice machines.

Finally, honesty is one of the most important traits to look for in a service company. If the ice machine repairs are severe, an honest technician will inform the owner when it would be cheaper to buy a new unit altogether. The bottom line, a great ice machine service company is a contact you should hold on to.

Here at Easy Ice, we’ve worked to gather the most experienced Ice Machine Experts in the industry. Our all-inclusive ice machine subscriptions take the hassle out of maintaining your ice machine. We include the best commercial ice makers from Hoshizaki and Manitowoc with no capital upfront. We also take care of all ice maker components with routine maintenance, cleaning, and repairs. If an ice machine encounters a severe problem, we’ll replace the machine at no additional cost to you. Looking for the easiest ice machine solution around? Call on Easy Ice!