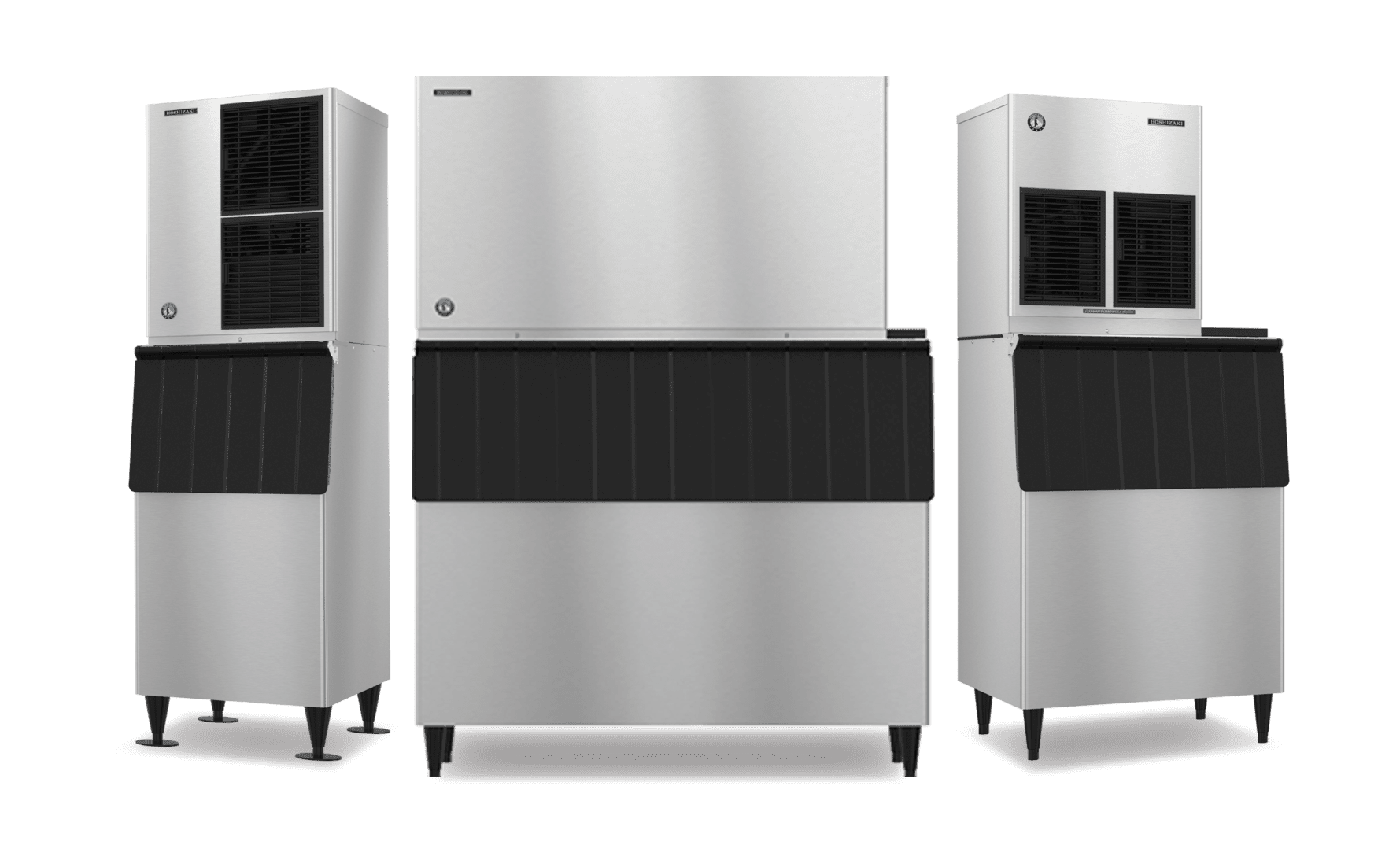 Put simply, beeps are ways for a Hoshizaki ice machine to communicate that it’s having an issue. The beeps come in patterns three seconds apart, and different numbers of beeps indicate different types of issues—some requiring immediate action and some a little less urgent.

Hoshizaki KM-series ice maker beep patterns are designed to alert the operator of operator of seven different conditions that signal improper operating conditions—with one, two, or three beeps being the most common. After sounding the beep pattern, the ice machine will either shut itself down, or keep running with limited capability while sounding its beep pattern. In most cases, ice cube production will be affected until the condition that caused the alarm is resolved and the ice machine alarm is reset.

The first thing you should do if your Easy Ice Hoshizaki ice machine or Hoshizaki countertop ice maker is beeping is count the number of beeps between the three-second pauses to find out which of the seven conditions it’s indicating. More urgent issues will require immediate attention from an ice machine expert to prevent further damage to the ice maker, while less urgent issues can sometimes be resolved with relatively simple troubleshooting and an ice maker reset.

Please note: If you’re a current Easy Ice subscriber, it is critical that you do NOT reset the alarm without calling an Easy Ice representative first.

Keep reading to learn what the different types of Hoshizaki ice maker beep codes mean, and what might be causing the alarms to go off.

If a Hoshizaki ice machine beeps one time every three seconds, it means the thermistor is reading a high temperature of at least 127 degrees Fahrenheit at the evaporator outlet. There are several common reasons this happens, but the problem is that the ice maker is running too hot.

The most common reasons a Hoshizaki ice machine’s 1-beep alarm might be going off are:

Not sure what’s causing this issue?  Check out our extensive guide to troubleshooting a Hoshizaki 1-beep alarm.

When a Hoshizaki ice machine beeps in patterns of two, it means the unit’s harvest cycle is taking too long. When the ice maker begins a harvest cycle, it automatically sets a timer for 20 minutes. Before that time’s up, the thermistor in the ice machine must register 48 degrees Fahrenheit in order for the machine to end the harvest cycle

There are multiple reasons an ice machine’s harvest cycle might be taking too long, but common reasons we encounter include:

These issues are often a result of freezing weather and the various effects it has on an ice machine’s function—from frozen water lines to ambient air temperature preventing the thermistor from reaching 48 degrees. Read more about what causes these issues with our full guide to the Hoshizaki 2-beep alarm.

The 3-beep alarm also warns you of two elongated cycles in a row, but in this case, it’s the freeze cycle that’s taking too long. During an ice machine’s freeze cycle, water flows over its cold evaporator plates and freezes—this is when the ice cubes are formed.

The 3-beep alarm is a common issue, and it’s difficult to diagnose because a number of different factors—both within the machine and outside of it—can come together to cause elongated freeze cycles. The list of potential issues is a long one, but some of the reasons the ice machine’s freeze cycle is taking too long include:

Dealing with the 3-beep alarm? Get some more information about what might be causing it with our guide to the Hoshizaki 3-beep alarm.

If the ice machine’s 4-beep alarm goes off, it means that the mechanical bin sensor’s K-4 connector has a short circuit.

The 5-beep alarm is the exact opposite of 4 beeps—it means that the mechanical bin control has an open circuit between the K-4 connection on the control board and the bin control.

Just like in the case of a closed circuit, an open circuit can be the result of a bad wire harness. Check the connections in the ice machine and replace the wire harness if necessary.

Six beeps from a Hoshizaki ice machine means that the unit is experiencing a low-voltage situation. This alarm is one of two possible automatic reset errors, and occurs when voltage drops below 92 volts +/-%5. When this happens, the control board will start the 6-beep alarm and then shut the ice machine down.

When sufficient voltage is restored to the ice maker, the unit will turn back on and the alarm will stop.

Low voltage to your ice machine is typically the result of a broader electrical issue. When experiencing low voltage but not a complete loss of power, it’s often the result of a partial outage—or brownout. This usually happens when an area’s power use surges, such as instances of increased use of A/C during the summer in a hot climate, and can cause the voltage from the transformer to fall below the ice machine’s parameters.

The second of two automatic reset errors, the 7-beep alarm, sounds when a Hoshizaki ice machine is faced with a high-voltage situation—sounding when voltage exceeds 147 volts +/-5%. Similarly to the case of low voltage, this error will automatically shut down the machine, and reset it once proper voltage is supplied to the ice machine.

This issue is often caused by a ‘high leg’ or ‘stinger’ being supplied to the ice machine and can sometimes be solved by switching the two legs of power in the back.

Hear a Beep? Call Us!

There’s a wide variety of possible root causes of the conditions above, and your safest bet is always to call an ice machine expert. Easy Ice subscription customers can call 866-327-9423 any time of day, any day of the year to get tech support. If our experts can’t help over the phone, they’ll schedule a technician to come out ASAP. That’s just one way that Easy Ice takes the hassle out of ice machine ownership with our ice machine subscription program!

It’s important that you call customer service and provide the beeping pattern information so we can help resolve the issue and arrange for breakdown ice if needed. Be sure to head over to our Pre-Service Call Checklist before calling to ensure we can determine what it needs to perform properly. If you own your ice maker, you can also call the number above to see if we offer ice machine service in your area. If we don’t service your area (yet!), you may have to rely on a jack-of-all trades refrigeration or HVAC specialist. Some of these technicians are very knowledgeable about ice makers and some aren’t—we always suggest asking for a technician with experience specific to Hoshizaki ice machines.

Want to Stop Worrying About Your Ice Machine?

As an Easy Ice subscription customer, your Hoshizaki ice machine issues become our responsibility entirely. We supply you with a quality ice machine, handle all troubleshooting and repair, perform important maintenance and deep cleanings, and supply you with backup ice should your machine be down for repairs.

Our subscription is the Easy way to access the ice you need for your business without any hassle or headaches. If beep codes are signaling the end of your ice maker’s life, consider avoiding the huge cost of buying an ice maker. Subscribe to Easy Ice instead and get your ice the Easy way! Contact us today to learn more.

4 Comments on “Why Is My Hoshizaki Ice Machine Beeping?”