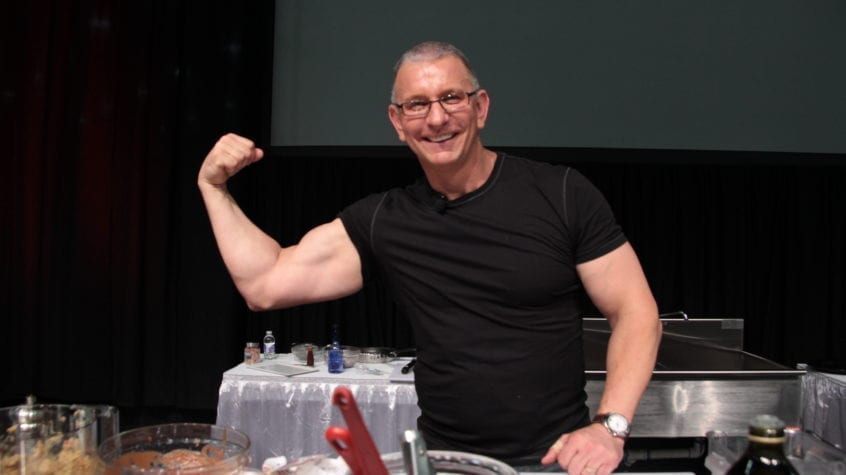 Easy Ice CMO and Co-Founder takes on the challenge of a workout with Chef Robert Irvine — and lives to tell about it!

I wake at 6:00 am, get dressed and arrive at the gym right on time for my Robert Irvine workout.  He’s already on the elliptical.  I approach the machine from the back and before I even get there, he pulls out an ear bud, points to the machine next to him and says – “Warm up for 10 minutes.”  How did he know it was me? I look at his timer and groan. He’s already been on the machine for 45 minutes.  We haven’t even started and already I feel like a slacker.

I set the Precor ramp at 12 and resistance at 13.  Half a dozen strides into it, Robert barks, “Hard! I want you sweating!” The guy had total hip replacement surgery four weeks ago so if ever there were a chance to keep up with him, it would be now.  I hit the 10-minute mark and attempt to squeeze 15 more seconds in to make up for my weak start, but Robert comes up next to me, “You’re done – let’s go.”  That “keep up with him” thing?  Not gonna happen…at least not right now. 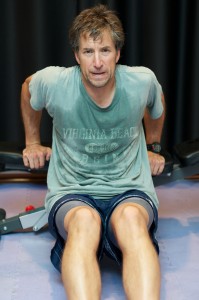 Over to the cable machine. He sets up one side, throws on 70 lbs., and begins a set of one-armed curls.  I’m going to impress him, so I reach to set up the other side and – “Don’t touch that.  Watch my form,” he commands.  He explains the key points, finishes his 30 reps, and sets me up.  “Thirty reps. Hold your form.” Five reps in, he’s satisfied I’m not going to maim myself, so he walks away to get a drink of water.  I silently count to 25 just as Robert walks back up. “Five more,” he says. How did he know I had five more?  “Lucky guess” I tell myself as I finish up.

I walk out feeling energized, at ease, and confident.  I just hung with Robert Irvine for an hour workout.  Okay, so he lifted the full stack while I worked with a few plates.  But here’s the thing: I hadn’t even thought about that, at least until now.

For 70 minutes, I just listened and worked. I didn’t think about anything but executing what Robert told me.  Heck, I have no idea what weight I was lifting.  I just trusted him and everything worked out. I had no doubt I was going to succeed.  Hmmm.  Classic Robert Irvine.  Just like Restaurant: Impossible.  Showing people how to succeed. 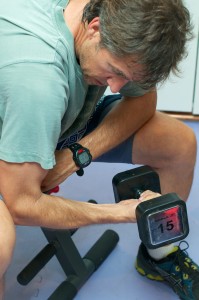 The other thing that hit me later in the day was just how often Robert reacted to something that seemed a bit “extra-sensory.”  Whether it was knowing when my 10 minutes was up without looking at his watch, or knowing my rep count…I get the sense that Robert’s ability to see what is going on around him is one of the qualities that makes him special – whether that’s hosting Restaurant:Impossible or cranking out a Robert Irvine Workout.

So here’s my question: Do you think Robert’s ability to see what is going to happen next is different that most people’s? Does he seem to have a sixth sense?  What do you think makes Robert so special?

I’ll write another blog next week about Robert’s interaction with some of the Trade Show participants – I learned a lot from watching those too!